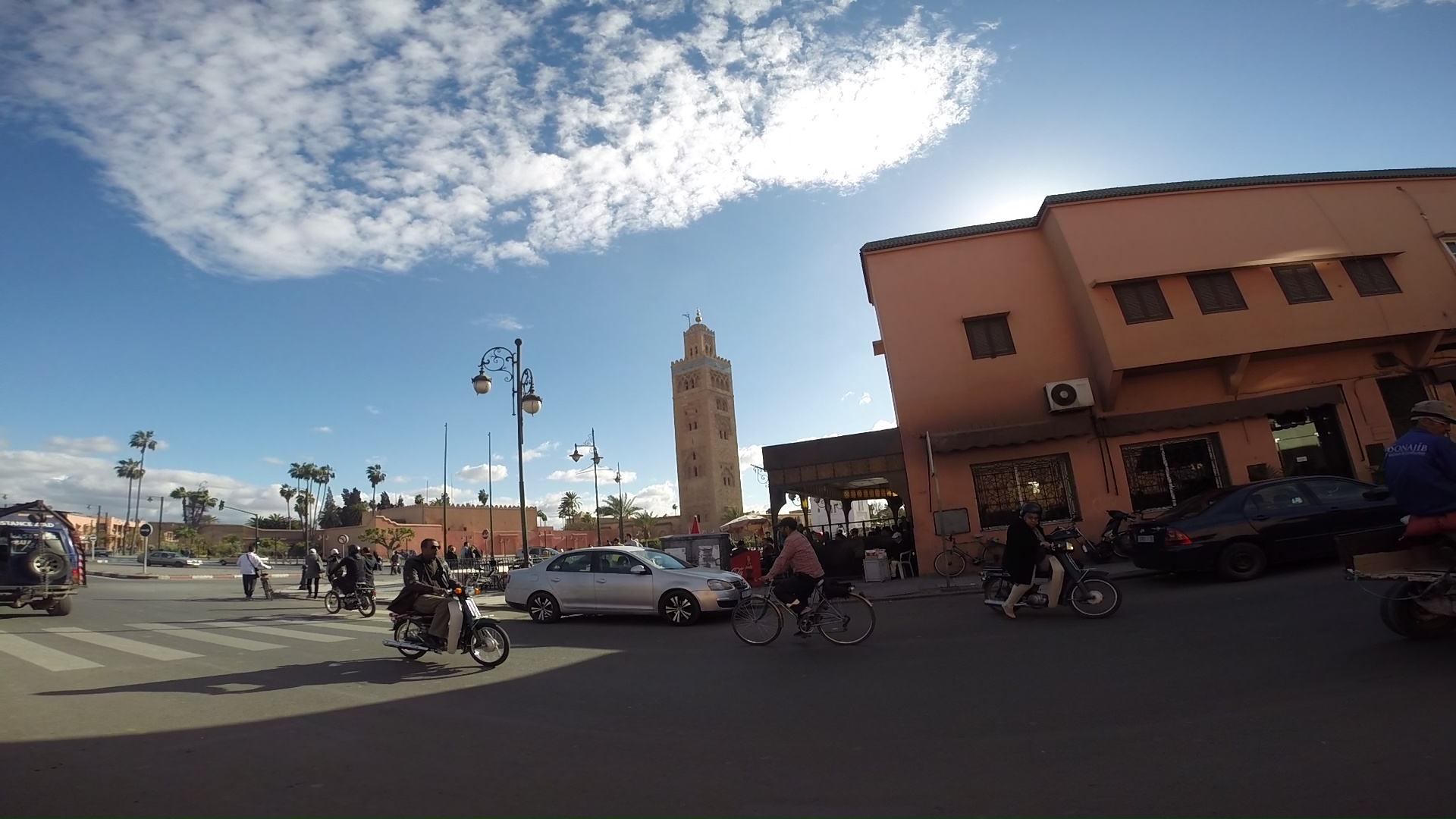 Marrakesh had long been on my list of places to visit. In fact, all of Morocco seemed like a great place to explore. It’s so close to Spain, but couldn’t be further apart in many ways. I had been looking to visit Morocco for a few days as soon as we booked our flights to Lisbon. How were we going to get there? What were we going to do there? There is the ferry from southern Spain to Tangier, but that would cost our family about $150 one way and the best city (Marrakesh) to visit was still 24 hours away by train. If there was more time, travelling by ferry to Tangier would have worked, there is plenty to see in the north of Morocco. We could have spent some time in Tangier and then on to Fez and Chefchaouen. However, the main attraction in Morocco is Marrakesh and the high atlas mountains found in the south. After some digging, I was able to find a flight to Marrakesh from Seville, Spain.

I booked a flight on Ryanair for the absurdly low price of $177 CAD – total, for all 5 of us! The only logistic left to worry about was how to get us from Lisbon to Seville for the flight. In the end, it was most cost-effective to rent a car from Lisbon and park it at the airport in Seville which is exactly what we did.

Since Ryanair sells you the ticket for so cheap they are very strict on baggage allowance. We weren’t going to pay 50 Euros for a checked bag if our airfares were only 23 Euros each. We were allowed a carry one bag each so some of our luggage spent the four days locked in the trunk of our car in the Seville airport. The flight itself was very smooth despite poor weather in Seville. One hour later (and a world apart) we were landing in Marrakesh. 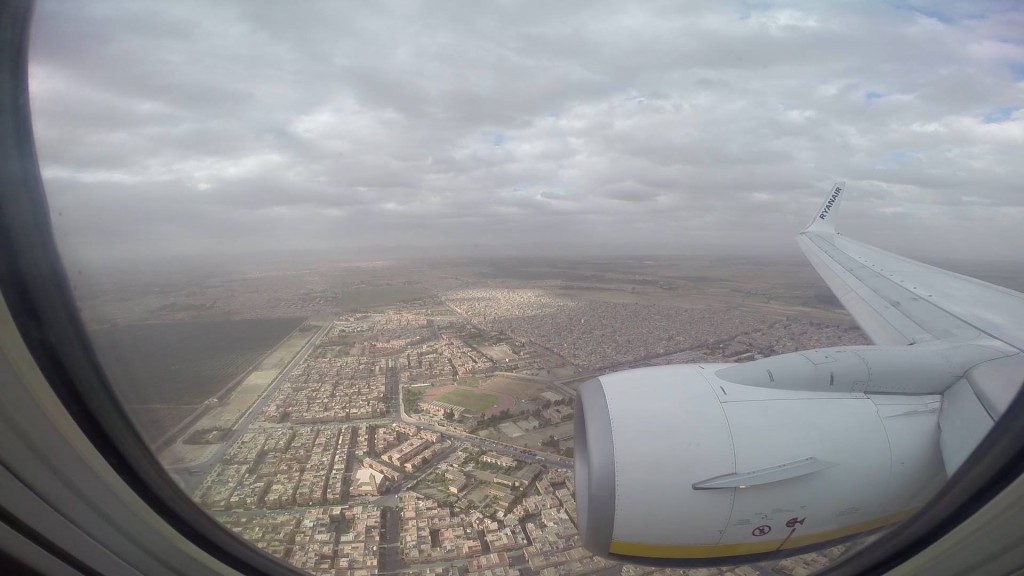 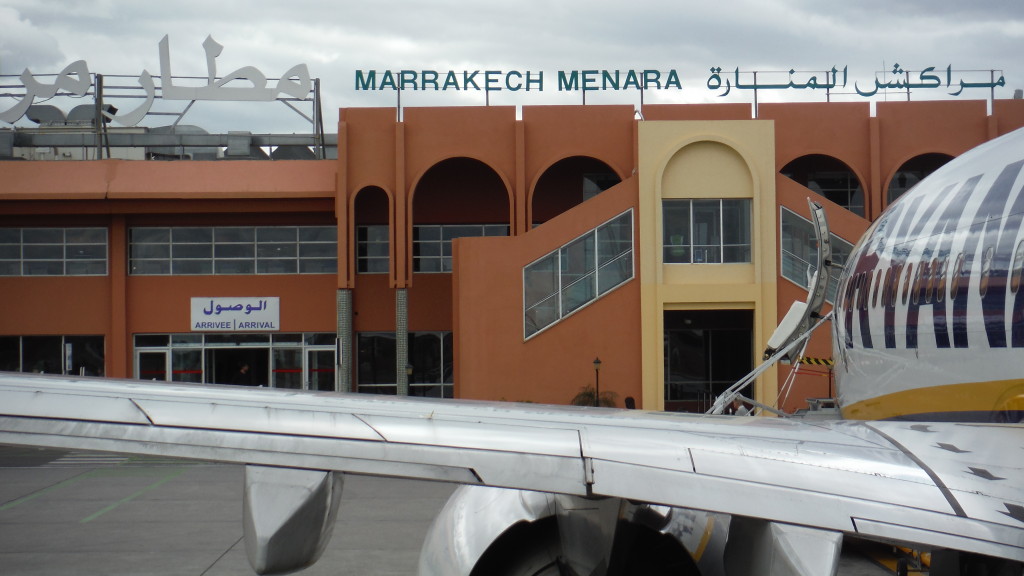 For our accommodation, we used Airbnb to rent a traditional Moroccan riad. The French couple who owned the riad arranged a driver to pick us up at the airport and drive us to the riad. The riad had three levels and was open to the outside with only a tent/tarp covering the inner courtyard. Often in the morning, there were birds flying around the inner space making all kinds of noise. There was one bedroom a kitchen and a family room on the lower floor, two bedrooms on the middle floor and a covered family room and an outdoor shower and eating area on the third floor. The riad was located just north of Jamma- el-Fnaa in a residential area filled with traditional Moroccan homes. The entrance was a simple blue door among a maze of crowded narrow streets. Once inside, the noise and chaos of the streets are gone, the only sounds of the city you can hear are birds chirping. 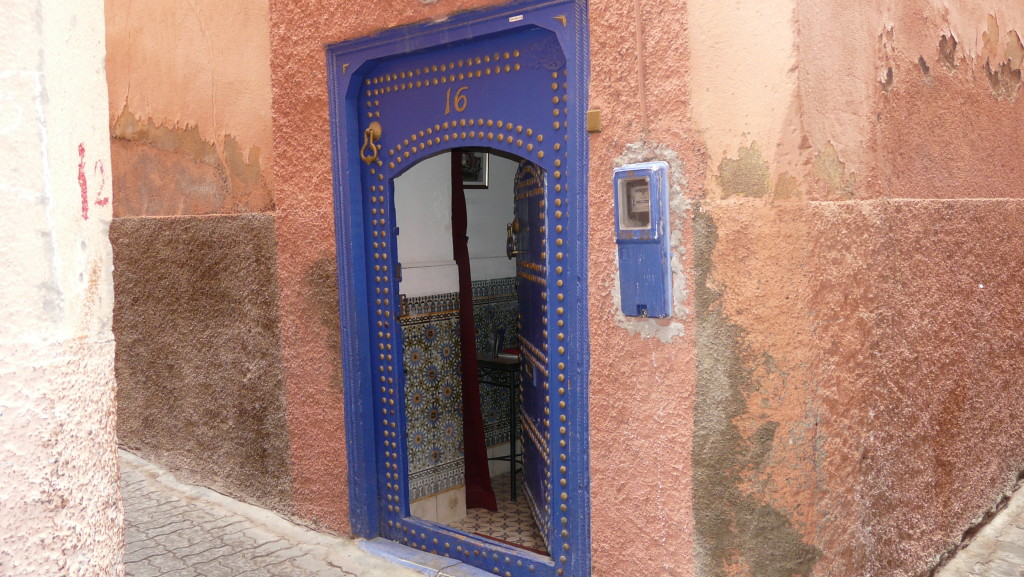 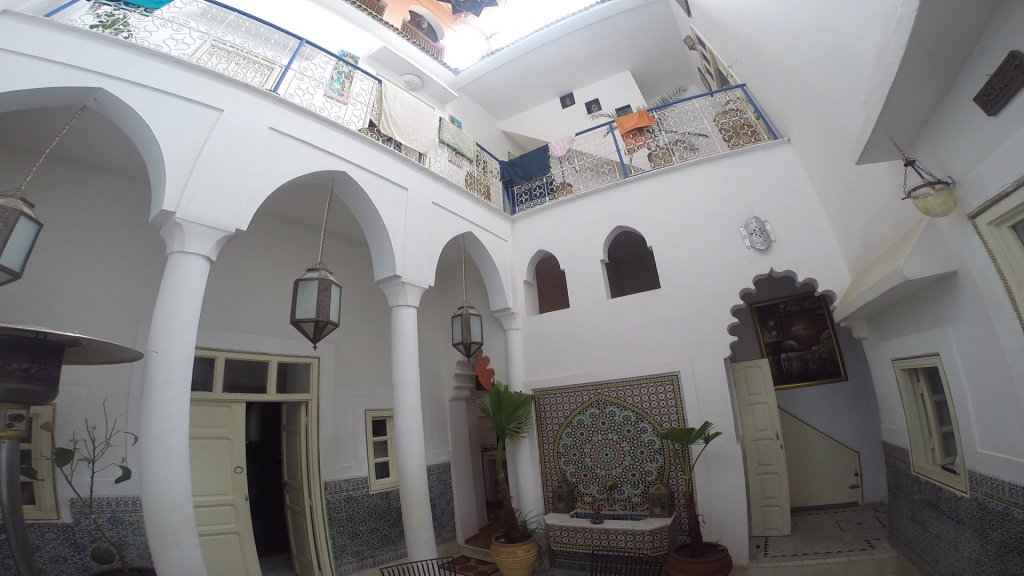 Once settled in, we set out to explore the main medina and square known as Jemaa el-Fnaa. The square has been around for almost a thousand years and is a UNESCO World Heritage site. Nowadays, all the surrounding souks empty into this square and are surrounded by restaurants and food vendors. By day you will find orange juice stalls, snake charmers, guys with monkeys, “dentists”, meaning a guy with a pair of pliers and a pile of teeth on his table. Nicholas had watched the snake charmers on the Amazing Race and was deathly afraid of the snakes and by association, the drums and the sound of the oboe the snake charmers used. During our first visit to the square, it was after dark so the snake charmers had packed up for the day, but when we returned during the day, it wasn’t long before we could hear the drums and the sounds of the oboe as Nick suddenly grabbed my arm and said: “they’re here!”. He didn’t want to go anywhere near them. To hear the sounds and see a bit of the chaos at Jamaa el-Fnaa watch this video. 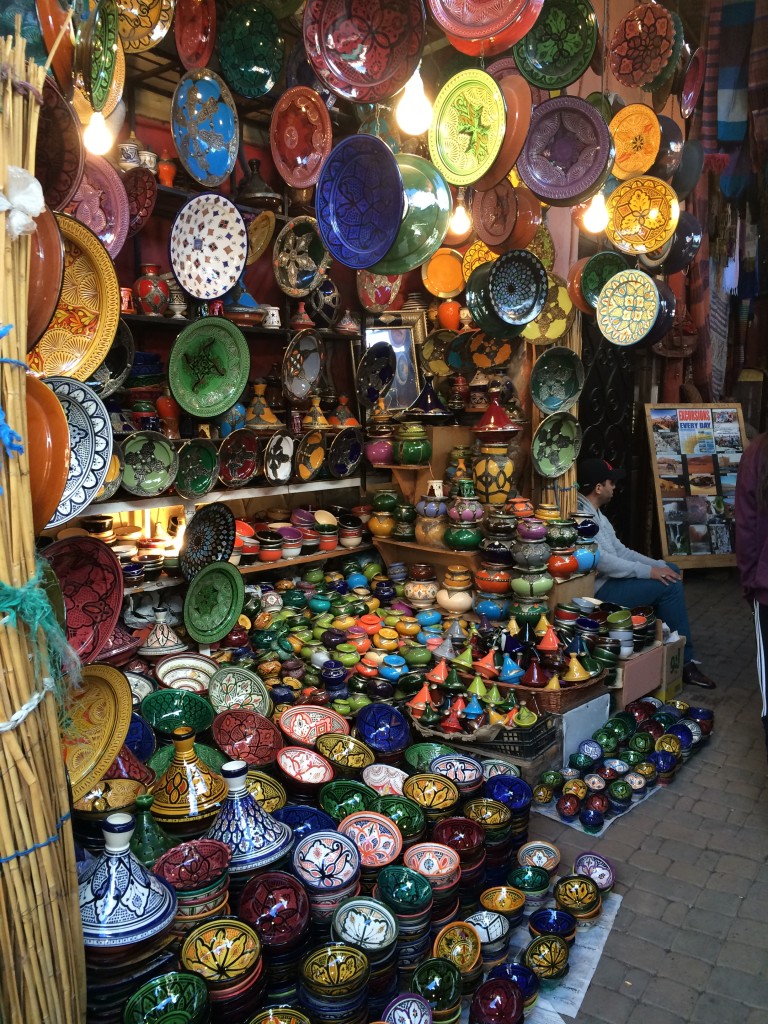 Surrounding the Jamaa el Fna is an endless maze of souks and alleyways full of vendors selling everything under the sun. You could spend days in there wandering and never passing the same place twice. There are always people popping out of nowhere looking to sell you something. They are truly unbelievable how they just emerge from thin air to start harassing you over some trinket they want to sell. There were kids younger than 10 who would just materialise in front of you with little toys to sell you. If you engage them they will follow you forever, if you ignore them they will follow you for almost forever. Many of the shop owners and sellers speak a multitude of languages. I’ll give them credit, they just listen for you to speak once and when you do they will continue on in that language trying to sell you anything you may have glanced at. English, French, Spanish, Italian German, many of them are very fluent in all of them. On our last day, I thought I’d pretend to be Russian thinking they won’t know Russian. Predictably it wasn’t long before the shopkeeper came up to us while looking at these lanterns. “Hello sir”, “Bonjour Monsieur”, he said, trying to determine what language I spoke. I just ignored him and turned to my daughter and said “nyet, nyet, spasibo”, my only known Russian. It worked, he just walked away and let us browse his wares uninterrupted.

One thing about roaming the souks, you never know what is around the next corner. The narrow streets are filled with speeding motorcycles, bikes, school children, donkey carts, and the occasional random guy with a dozen freshly severed goat heads. 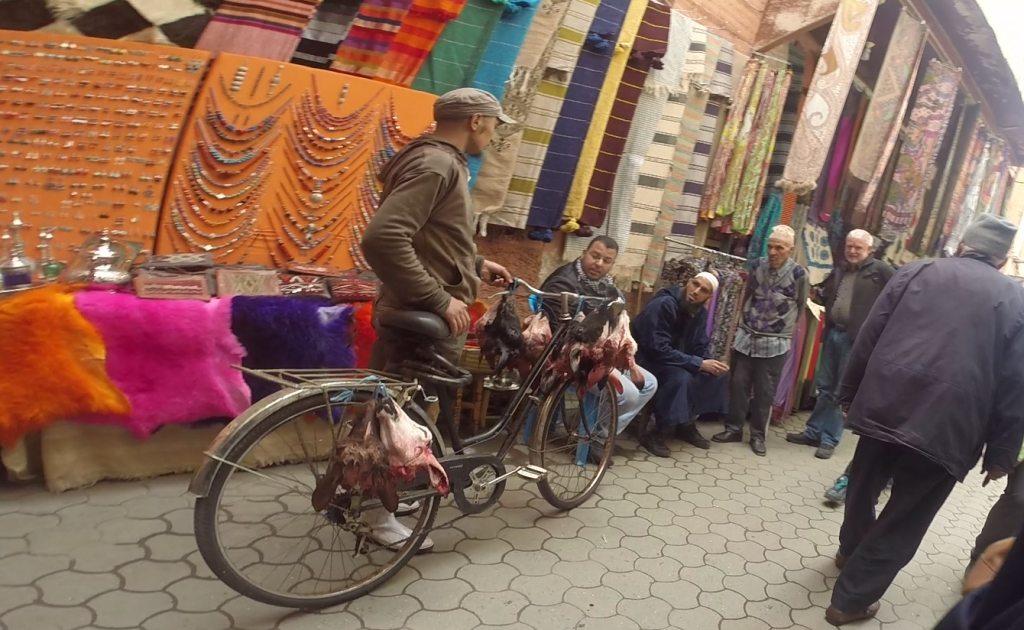 Nobody said a word when this guy suddenly appeared around a corner. We quietly passed and once out of earshot I asked the kids what they thought. Natasha replied, “That was horrendous”.

The friendly and persistent vendors will sometimes follow you for several minutes to entice you into their store. If you do make the mistake of following them they will try to sell you anything and everything. Then they will dress you in the local fashion and give you mint tea. 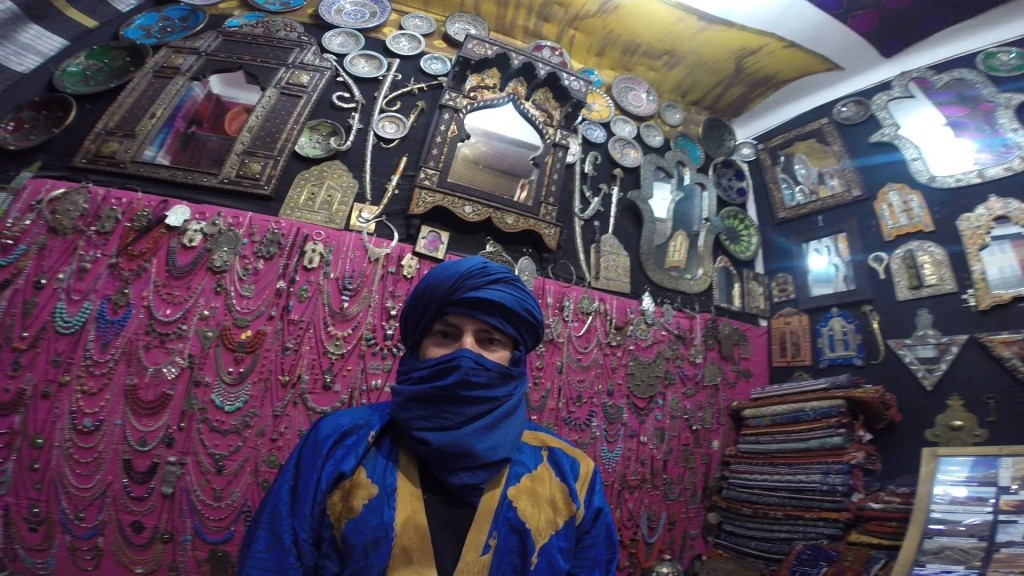 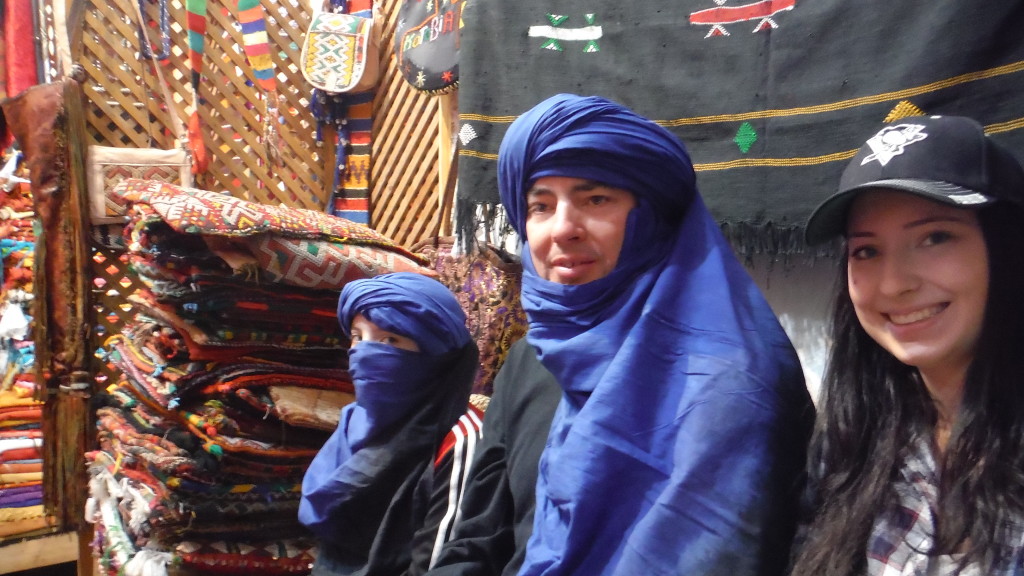 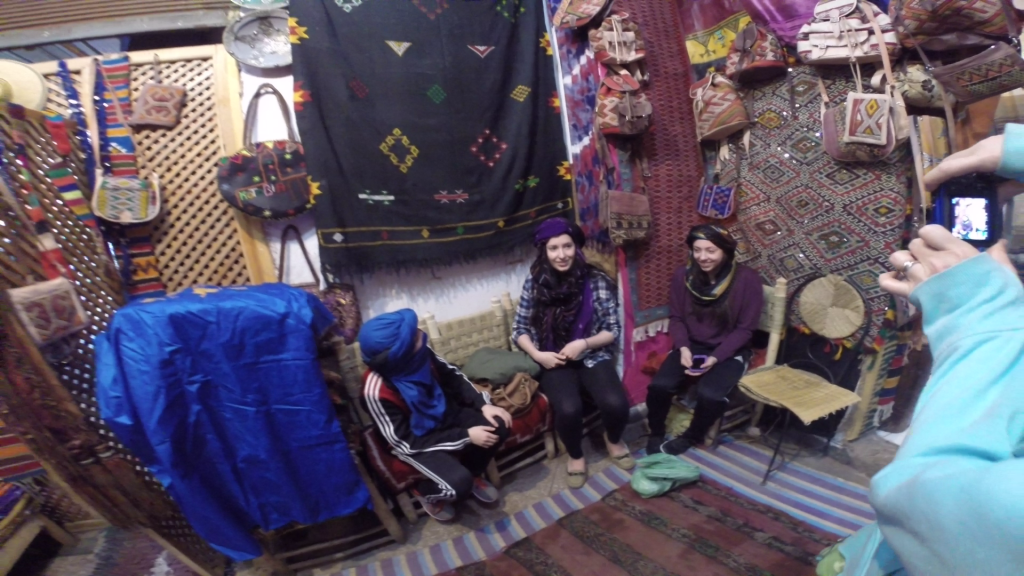 When in Morocco you must try tagine. I had it every night while in Morocco and loved it. Natasha was brave enough to try couscous our first night, but for the most part, the kids had pizza or lasagna The exception was our overnight excursion to the Sahara in which all there was for dinner was Tagine and it was awesome. 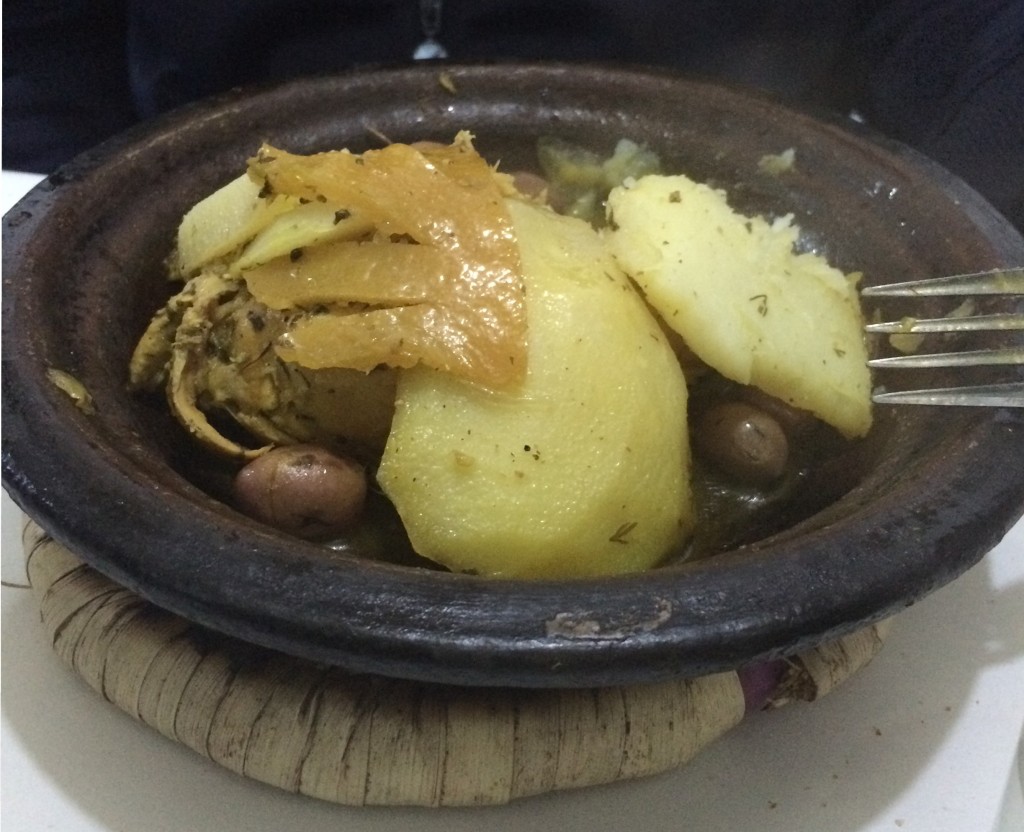 I knew about the various characters and interesting people we’d encounter in the square. I was determined to get a few close-ups of the cobras despite it being a total scam. I had read online how these guys work. They have an army of guys just looking for tourists to lure in for a closer look. Of course, the closer look isn’t free. In fact, a few of their entourage is constantly scanning the crowds looking for tourists who are trying to get a picture from a distance with a zoom lens. I wasn’t going to be caught doing that. I simply walked up and told the guy what I wanted and asked him how much. He’s said “no problem, you just pay what you want” I agreed knowing full well this wasn’t going to be cheap. He did what I asked, he waved my GoPro in front of a few of his cobras and had them hissing, spitting and trying to strike my GoPro. I had to show him how to use it and not turn it upside down but he did get some really cool shots and video. When he was done he asked for a bit of money to be dropped into his drum. I reached into my pocket and gave him all of my change. It amounted to under $2 Canadian. Predictably, they were very offended and said only bills would do. I knew this was happening beforehand so I’d handed my wallet to Lynne who was keeping her distance. I told them to hang on a minute and I’d have to go and get some bills for them. They agreed but all the while the guy with the strange green snake around his neck was getting closer and closer to me as a form of intimidation. I quickly ran over and grabbed them two bills, a 50 dirham note and a 20. I returned and threw in the 70 dirhams and went to grab the 12 or so in change I’d already given them but that disappeared. He handed me the GoPro and got the hell out of there.

The bottom line is…you are going to pay twice. They will just take what you are willing to give them the first time then intimidate you with the thought of putting snakes around your neck until you pay them a second time, the second time being about 5-10 times what you paid the first time. 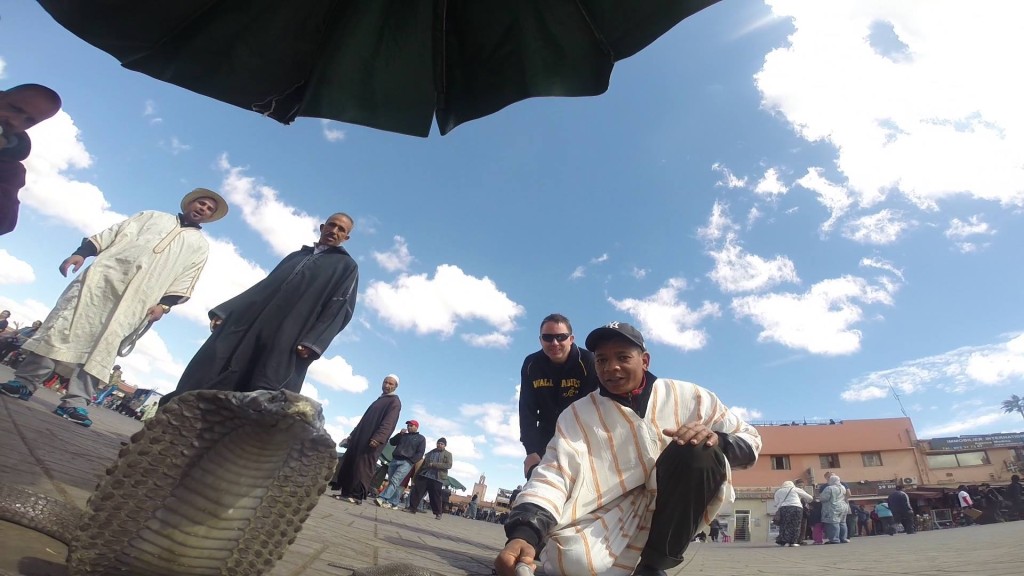 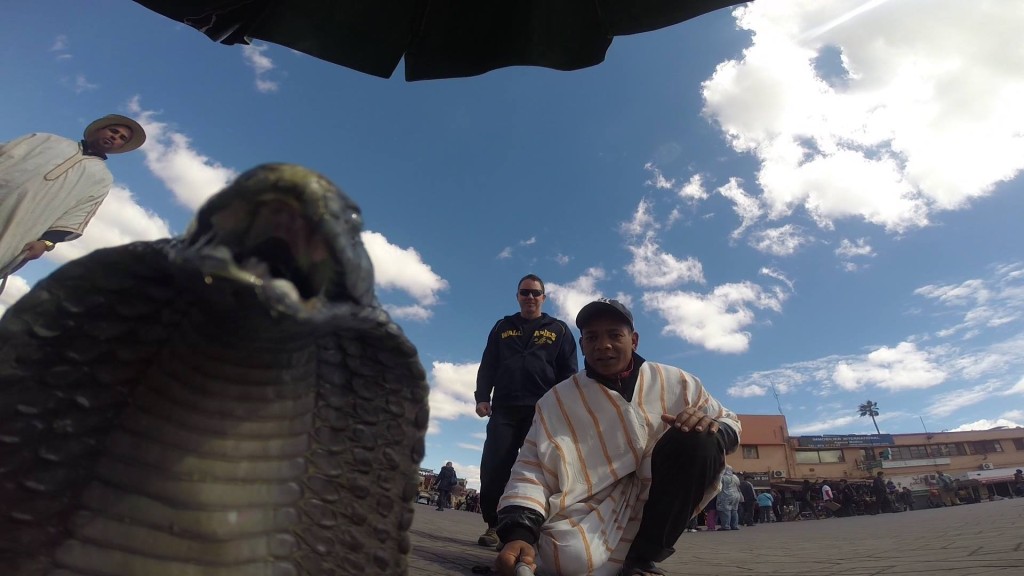 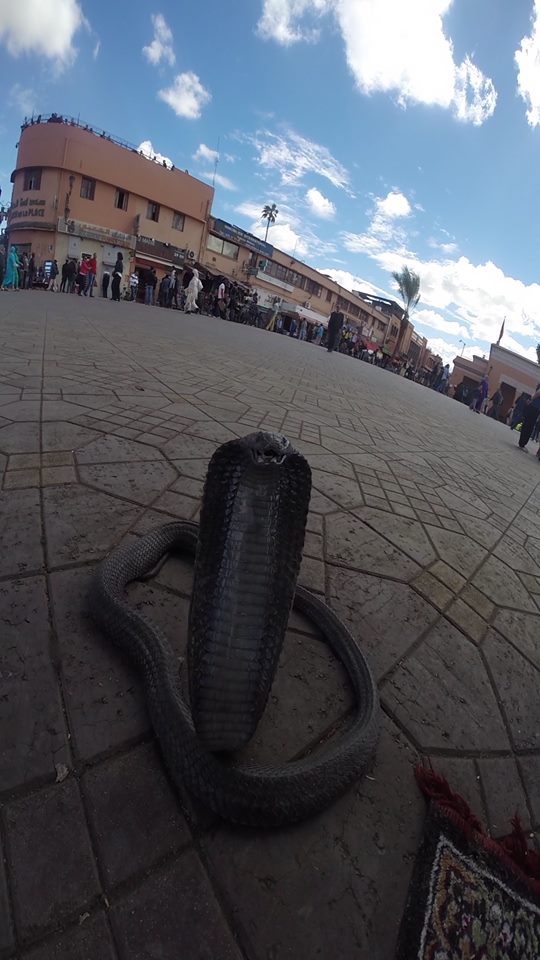 Morocco and Marrakesh is a fantastic place to visit. There is so much to see and do, you could easily spend a month travelling around the country and seeing its diverse cities and countryside. For us, it was March and the weather was cooler than normal, but still was 22C during the day. During the Moroccan summer, Marrakech can be stifling hot and uncomfortable with many days in excess of 40C.

We did an overnight to the Sahara desert that I will write about in another post and spent enough time in Marrakesh to get a good feel for it. I was hoping we had time for a day trip to the coastal town of Essaouira but there is never enough time for everything.

PS You can see the Airbnb listing here. 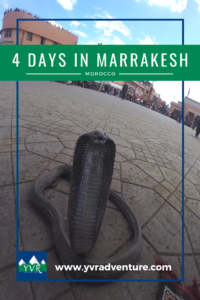 One thought on “Marrakesh”