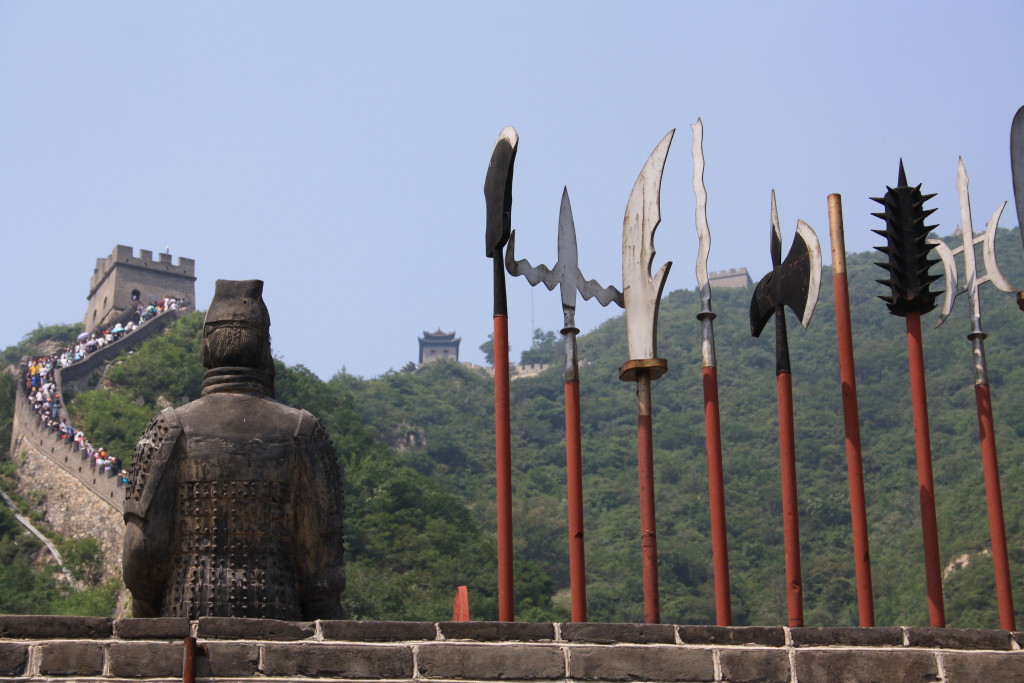 As part of our 2009 Round the World Trip, Beijing and the Great Wall of China was a must-see. We were staying right in Beijing and there are several great wall locations within 100 kilometres of Beijing, just had to pick one and find out how to get there. Most of the packaged tours are too expensive and not my style so I’d researched how to get to the Juyongguan Pass section of the wall. Not as popular as the Badaling section most tourists go to, but in my opinion, it was much more authentic and definitely a better workout climbing it as the Juyongguan Pass is very mountainous. It turns out it was only 60 kilometres from Beijing and could be accessed fairly easily via subway and public bus.

By our third or fourth day in Beijing, we were experts in getting around the cheap and efficient Beijing subway system. It had just been upgraded for the 2008 Beijing Olympics and now had English signs among other improvements. The directions to Juyongguan Pass were straightforward. Ride the subway to a certain stop and there we would find a green bus with a certain bus number on it. Sounded simple and it was going to be extremely cheap for the five of us. 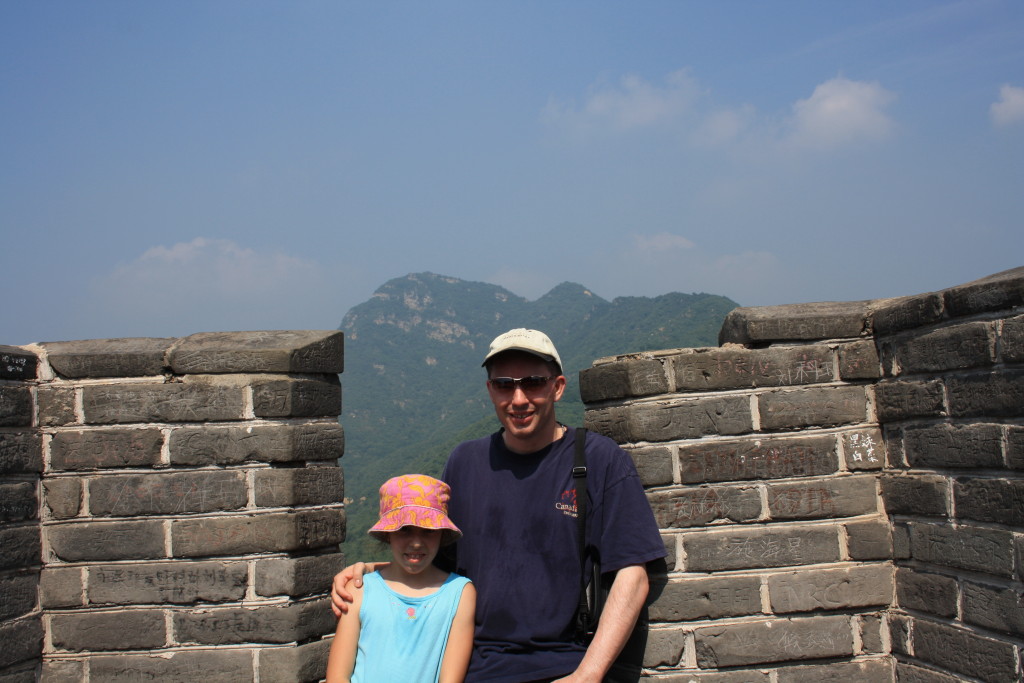 We were up and gone out of our apartment very early in the morning for the excursion to the wall, and after 3 or 4 subway transfers found ourselves in the northern suburbs of Beijing near the terminus of the subway line. I had handwritten in Chinese characters “Juyongguan”. I had no idea if my handwriting of the Chinese characters was legible to a local, but I thought I’d try to write our destination in Chinese in case we needed help. The bus loop was just outside the station and we were able to find a sign with our bus number on it. Soon the bus came and we were on our way. Not long an English-speaking local approached us and asked if we were going to the great wall. Yes, I said, he told me to get off the bus at the next stop and look for a green bus number 68. We did as he said and thanked him.

There were about a dozen people waiting for the bus at this next stop. By this time we had really ventured off the tourist trail and we were on the outskirts of Beijing. You could hardly tell there was a massive city so close. After about 10 minutes the number 68 bus begins to approach. As it gets closer and begins to slow, you can see it’s going to be a little crowded. By the time it stopped, I could see this wasn’t going to be an option as the bus with a capacity of maybe 30 must have had over 60 people crammed inside. To my astonishment, a few of the locals who were waiting managed to squeeze inside. By the time it left the bus was so jammed with people it was comical. We waited for one more number 68 bus, and when it finally arrived it too looked like a sardine can on wheels. I wasn’t sure what we were going to do, I had no idea how to get back to the subway and there wasn’t any taxi’s anywhere to be seen. 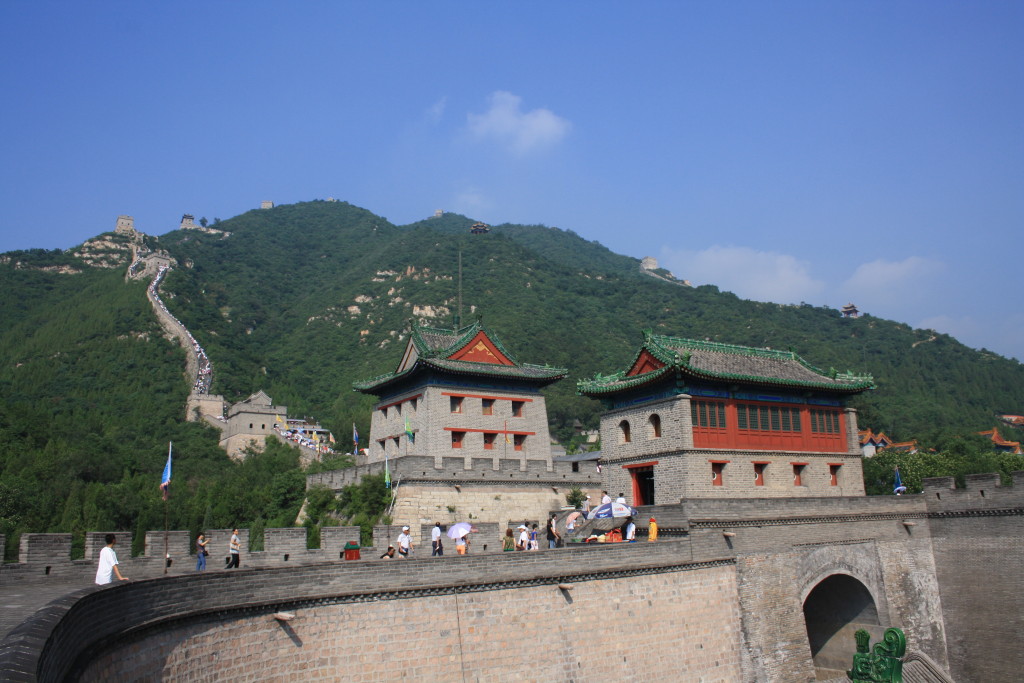 Suddenly a man appeared first in a car, then he stopped the car and ran over to us. He asked in a heavy Chinese accent, “where you go?” I showed him my handwritten note with the two Chinese characters and he said: “ok, I take”. In a flash, we piled into his small car and somehow we managed to communicate that I would pay him 100 Yuan for the ride. The ride from where he picked us up to the Great Wall wasn’t long and quite scenic. I was amazed at how little pollution was in the air, just a bright blue sky, something we hadn’t seen since landing in China with all the haze stuck over Beijing most of the time. The man dropped us right at the ticket booth for the Great Wall and said something about the clock, he just pointed to his clock and said something. I thought he was asking how long we would be, but I wasn’t counting on him for a ride back so I just thanked him for the ride and paid him. 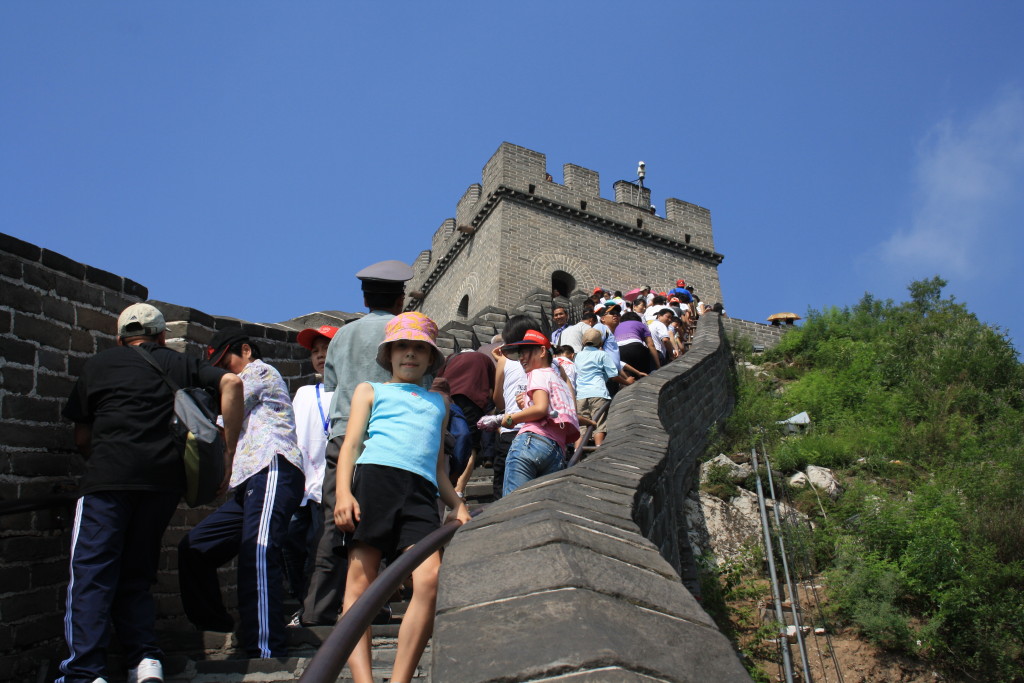 Once we entered the main gate I could immediately see the immensity of the Great Wall. It went on for as far as you could see in both directions. From where we were you could go two ways, both of which looked like they would involve a lot of climbing. we picked the way that looked more interesting and started out climbing. It was hot in Beijing that week, temperatures were in the 38-40C range every day. Although it was still early morning it must have been over 30C already. 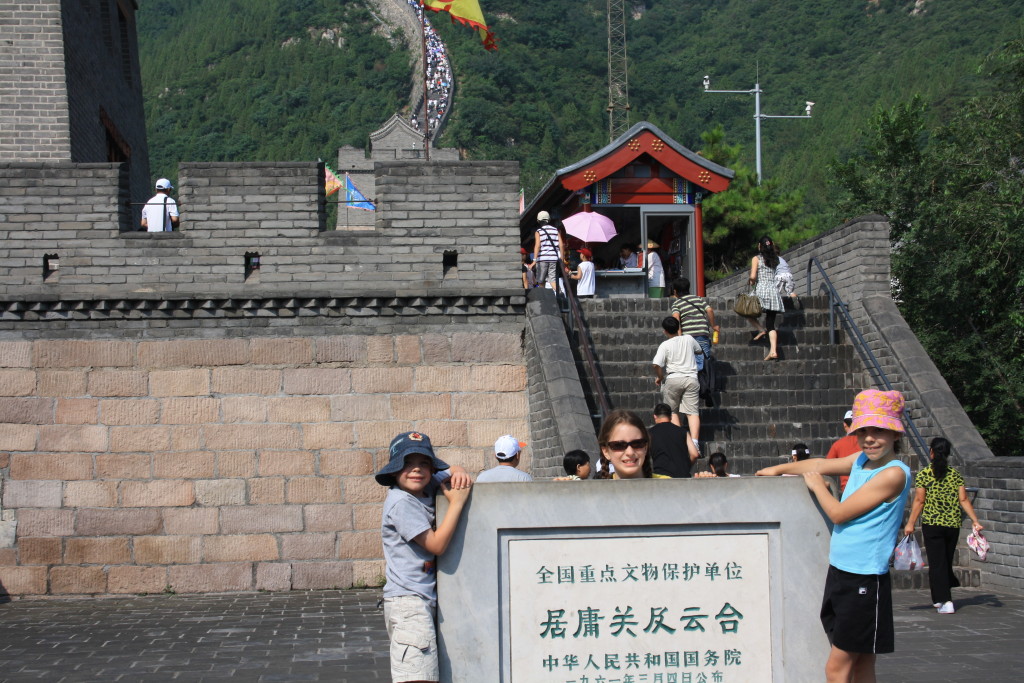 We would walk up to a tower and stop and take a break, either because the kids were tired or because we’d been asked by Chinese tourists for a photo-op. We were starting to get used to this as the day before in Tiananmen Square and Forbidden City the kids were constantly being asked to stop so other tourists (Chinese tourists from other parts of the country) could take pictures with them. 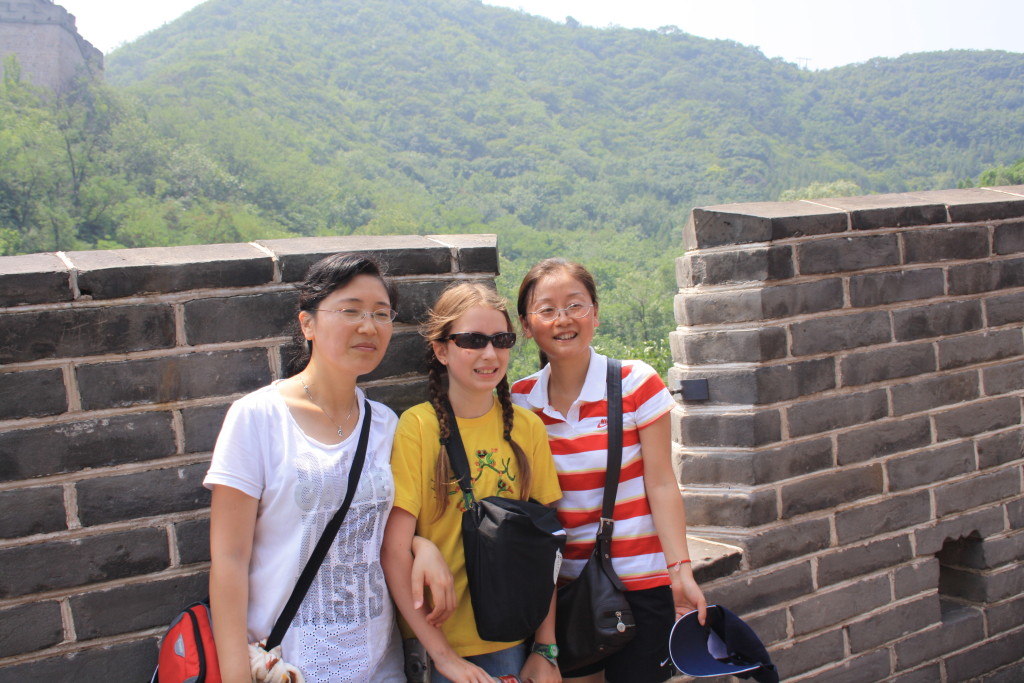 After about an hour if hiking up the wall, Lynne, Natasha and Nicholas had enough and stopped. Alyssa and I wanted to make it to the top and continued on. Every time we got closer to what we thought was the top another distant tower would appear, further and higher than the last one. Eventually, she and I made it after two and a half hours of gruelling, uneven, and broken steps. 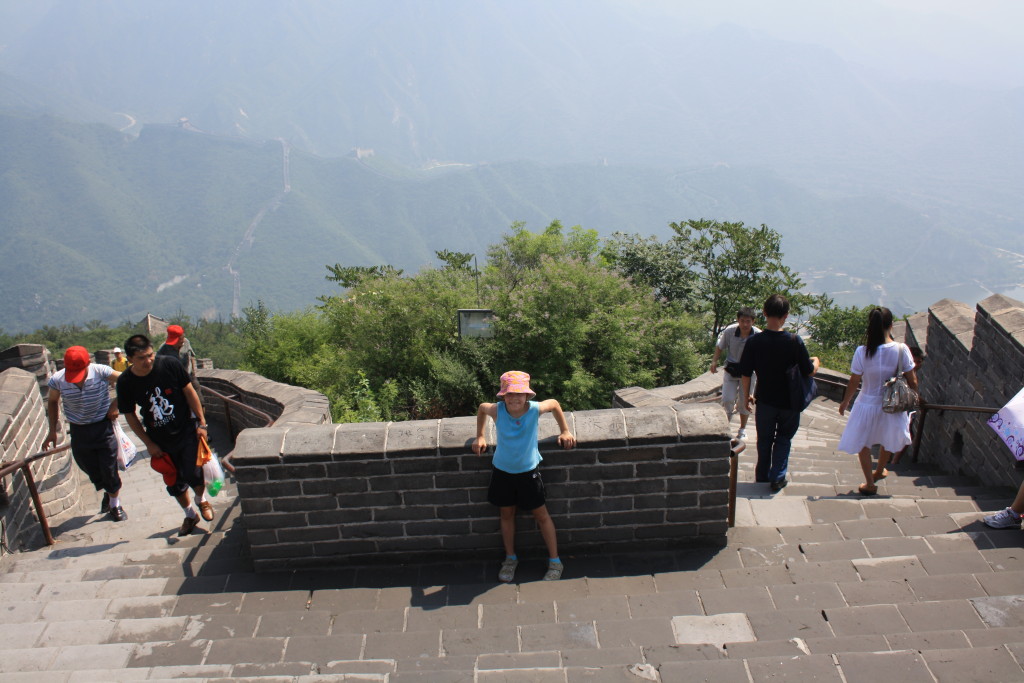 By the time Alyssa and I made it down to the others my legs were jello, and it was getting really hot. Near the bottom was a bunch of souvenir stands and everyone wanted to buy something. We had bought almost nothing on the trip so far. We had packed light for the trip and knew adding tee shirts and trinkets from everywhere we went wasn’t going to be practical. Here, we finally made a few small purchases and enjoyed haggling with the vendors. Haggling in China is done with a calculator. you point to an object and the vendor will type the amount he wants into a large calculator. You type you offer back in and hand it over. The process goes back and forth until a deal is made. 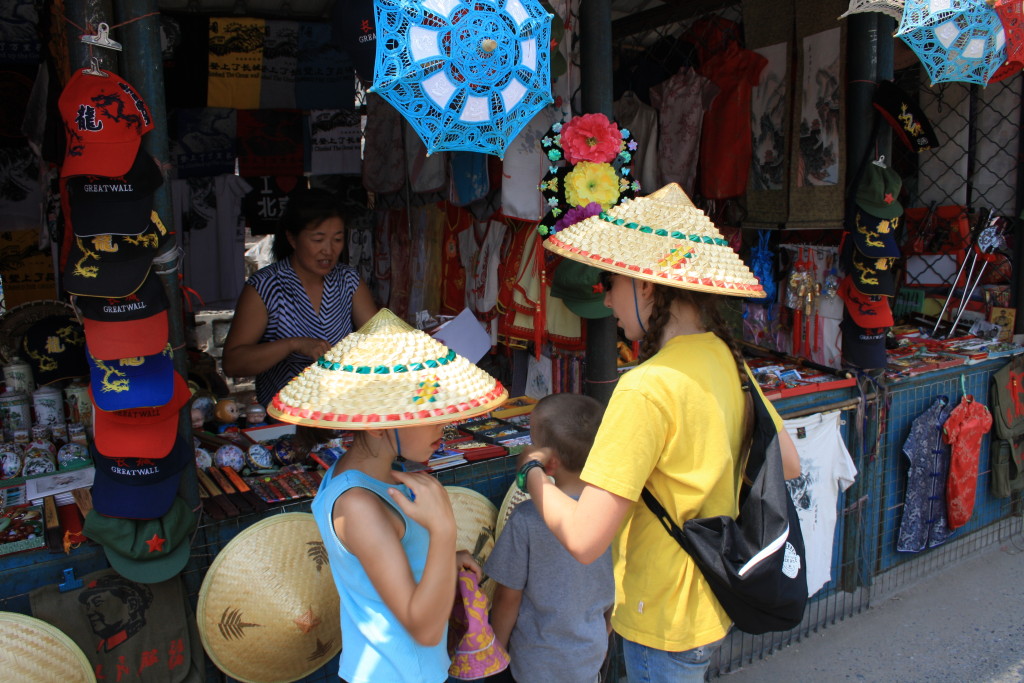 Once we left the souvenir stands, we started to look for the buses back to Beijing. You could see where the green buses were from up on the wall so I thought the return journey was going to be easy. On the way down the steps back to the parking lot where the buses were, I could see a guy and car. As we got closer he started to wave to us, it was the guy who gave us the ride there! Perfect, I didn’t expect him to be there, but I guess he did. We got in and were on our way back to Beijing, or so we thought…. 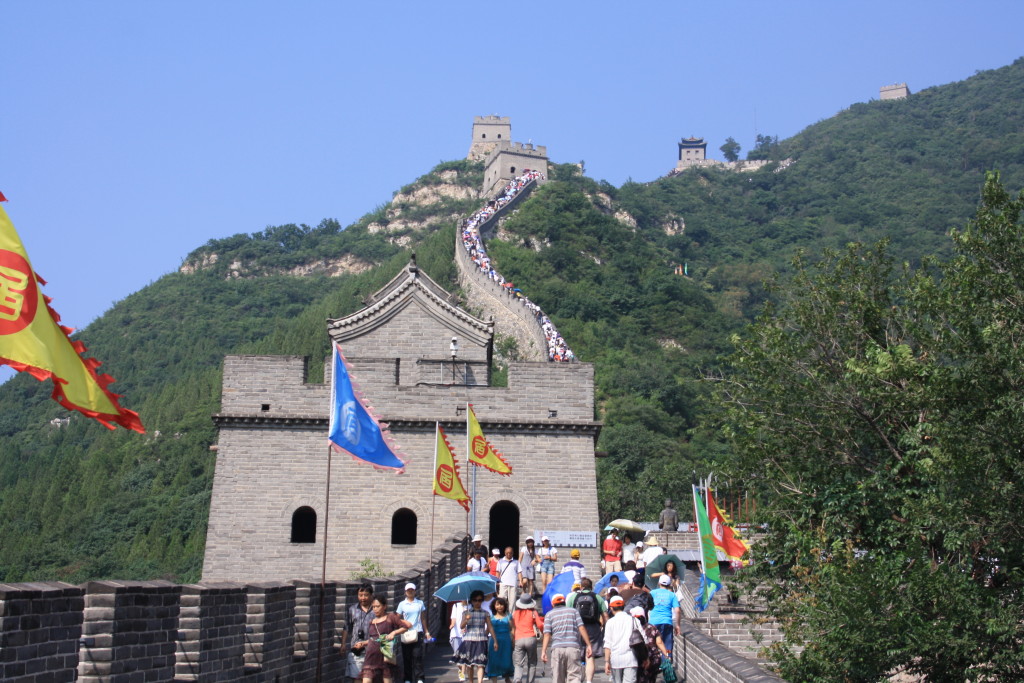 After about 20 minutes of driving and what seemed like the return route back to where our driver had found us, he suddenly turned into the Ming Tombs! I tried to explain to him that was great and took a few pics but we were exhausted from the Great Wall and just wanted to get back to the city. The language barrier was becoming an issue and he finally realised we weren’t going to visit the Ming tombs so he had us back into the car and we were off again. The whole time I’m trying to convey one simple concept. “Just take us back to where you found us” This would prove to be impossible as twenty minutes later we were at another ancient tomb site.

This time it was the Ding Ling Tombs. At this point, I thought it would be wise to seek an English speaker to translate to my driver. It turns out there are zero English speakers here, despite a full parking lot, but there are a few teenagers who speak a little bit of English and are very excited to try. Soon I’m surrounded by a dozen teenagers on a school field trip all anxious to try their English skills. I simply tell them “I need to be taken back to the place our driver found us.” This is really funny apparently and now every time I speak they all begin to laugh. One or two of the girls try their English but as soon as they start speaking English all the others burst out laughing too. This was starting to get silly and our driver is starting to get annoyed. We decided to carry on again and we were off, this time I simply pointed in the direction I thought would get us back to the city and he headed in that direction.

By now it’s been about 2 hours since we left the Great Wall and there is no sign of anything familiar. After a while, the countryside starts to be taken over by development and I’m thinking we are on the right track. Ten minutes later I’m sure we were back in the outskirts of Beijing, but who knows where. Suddenly I see in the side mirror a green bus. I recognise the bus number as the one coming from the Great Wall. I tell the driver to stop and get the family out of the car and immediately flag down the bus. He stops and we all jump on destination unknown. After about 20 minutes the bus seems to be at the end of the line at a depot of some kind. There was nothing to do but to get off the bus and look around the area for metro signs. 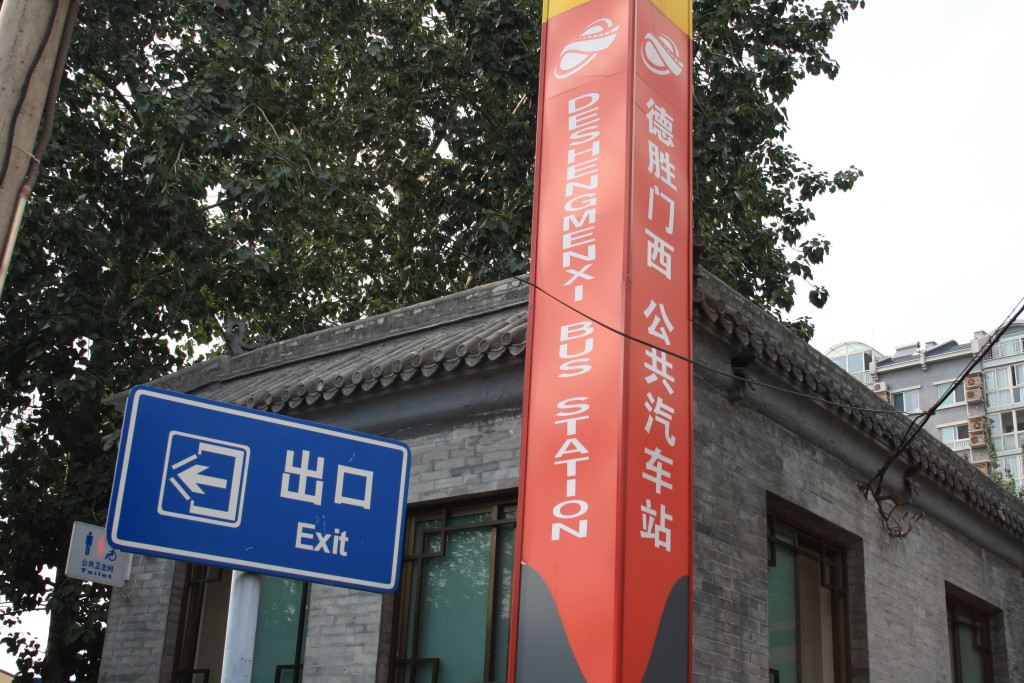 We walked a few blocks looking unsuccessfully for a metro sign or a map, but we did find a nice bakery for a snack. The poor young girl looked terrified to take our order fearing a language barrier as this was an area of Beijing far from the tourist trail I made it simple for her, just pointing to a treat and signalling I’d take five. She punched in the total in the register and I gave her the exact change. She seemed relieved as we sat and enjoyed our treat and break from the fact we were essentially lost.

Soon after leaving the bakery, I saw ahead a sign to the metro and we were able to locate where we were and it turns out we were close to the Bird’s nest and the main sites built for the 2008 Olympics. Before making our way back to our apartment we took a quick detour to the Olympic Park and saw the Bird’s nest (now a flea market) and water cube where the swimming events took place. An hour later we made it back to our apartment and put an end to a very long and amazing day. 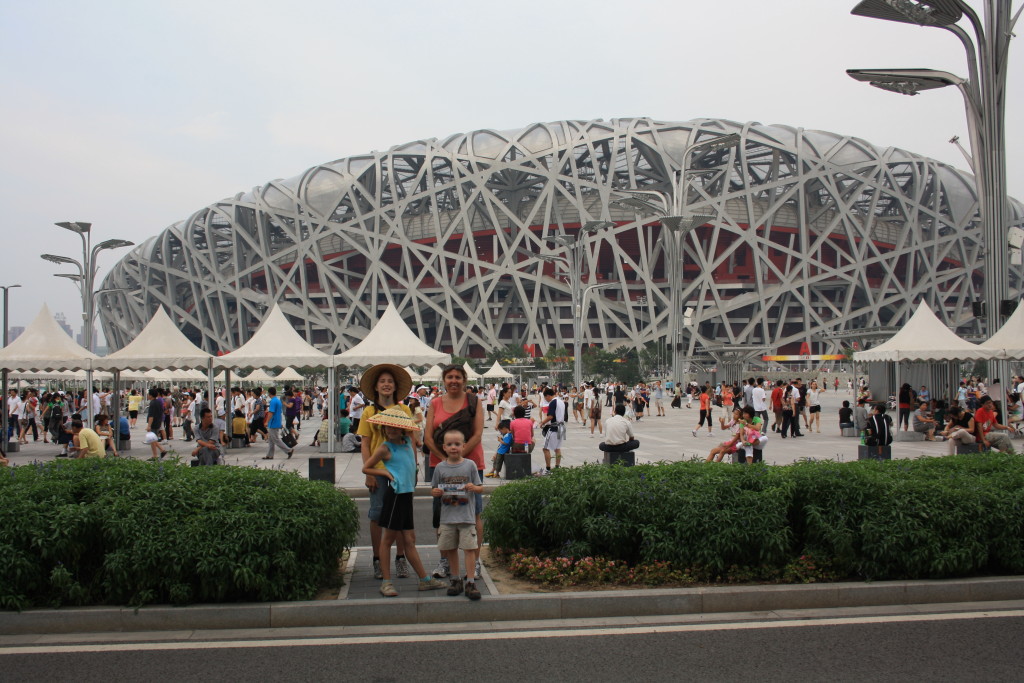 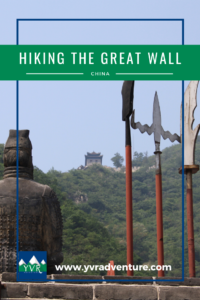