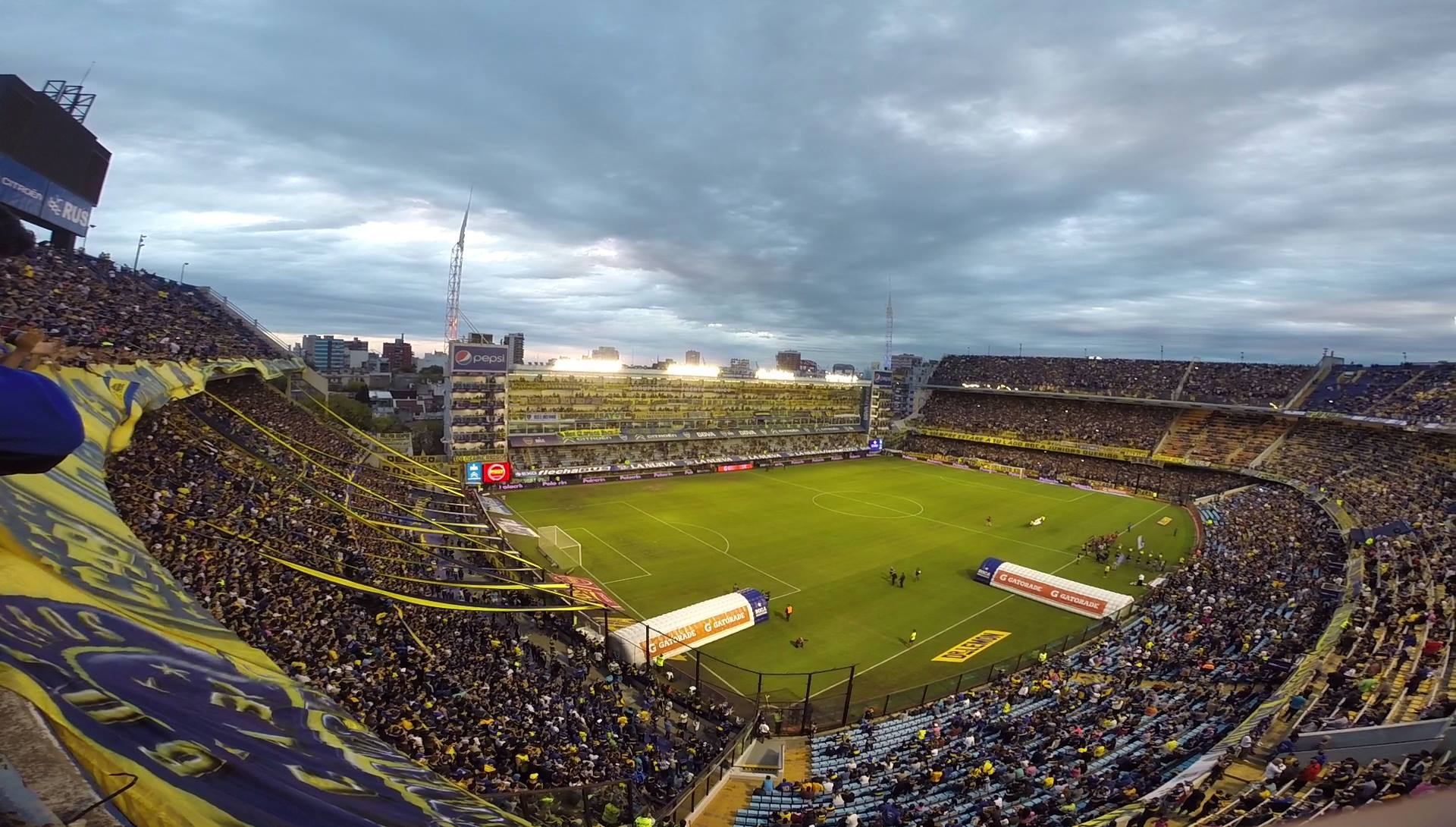 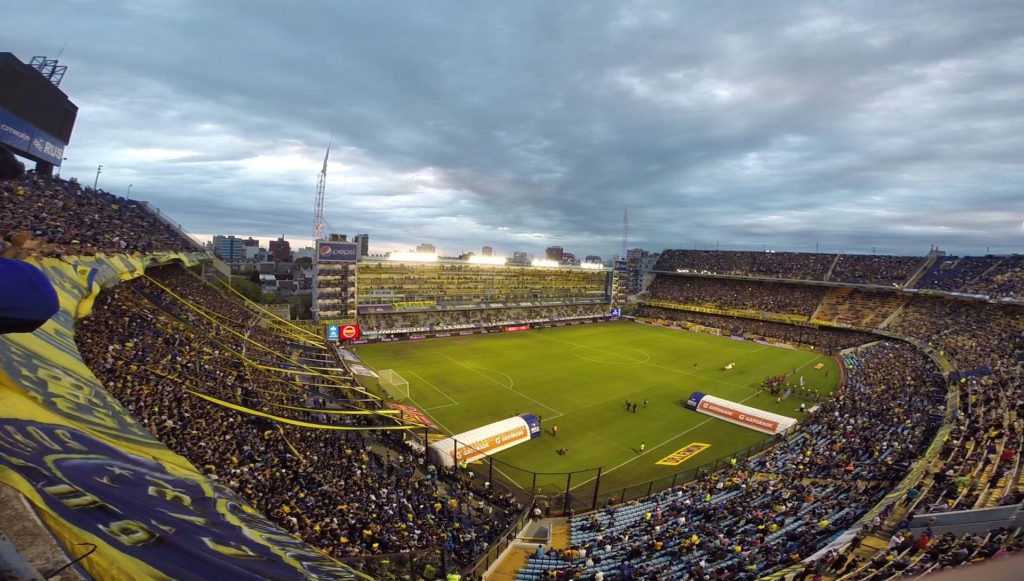 How can you describe the atmosphere in words? I’ve been to Oregon Ducks and Seattle Seahawks football games, two of the best sporting atmospheres in North America, and they aren’t even close. Canucks fans? They would be beaten up for being so lame. Attending a futbol match in Argentina is something I wish everyone could experience. When we decided to go to Argentina this year, attending a soccer match seemed like a great idea. What else to do think of when you hear Argentina?  We had a few options as there are dozens of professional teams within Buenos Aires alone, including the two biggest and most famous teams in the country, Boca Juniors and River Plate. Rivers’ stadium is in a wealthy neighbourhood and closer to where we were staying in Recoleta. Boca’s stadium, La Bombonera, is in the much grittier neighbourhood of Boca, in fact, most guidebooks will tell you Boca is a dangerous area outside of the touristy El Caminto street. 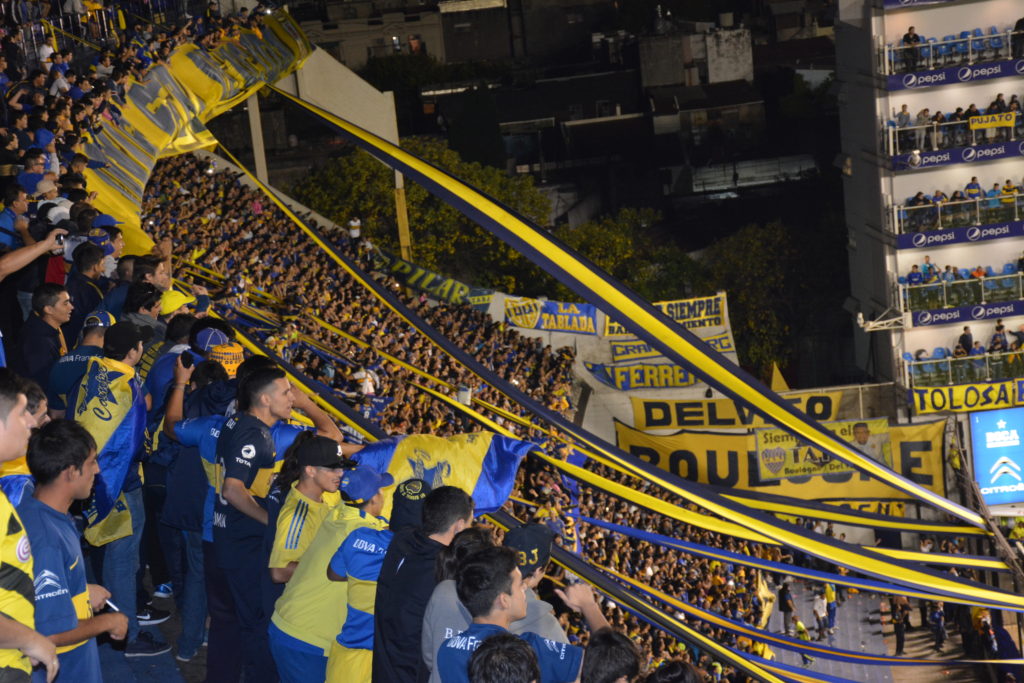 Picking a game and location was the next challenge.There are other prominent teams, San Lorenzo, Independiente, Argentinos Juniors among others. There have been many fan ‘incidents’ in recent years in the Argentine league, including deaths to rival fans. In fact, the Argentine Football Association has recently banned all visiting fans from all its games so picking the right game seemed important.

Next, we had to wait for the schedule to come out. In Argentina, they only release portions of the season’s schedule at a time. Once they did, it narrowed our choices down to a few games based on our dates. We could See Boca play Aldosivi, or San Lorenzo was playing at home as well. Adding to the possibilities were mid-week games in the Copa Americana competition that is the equivalent of the Champions League in Europe. In the end, we choose the Boca game, potentially the most dangerous venue, but also the most authentic and rambunctious experience possible. The game was scheduled for the Sunday after our late Friday night arrival, but just days before we left the Argentine Futbol Association changed the date to Saturday night, less than 24 hours after our arrival in Argentina. 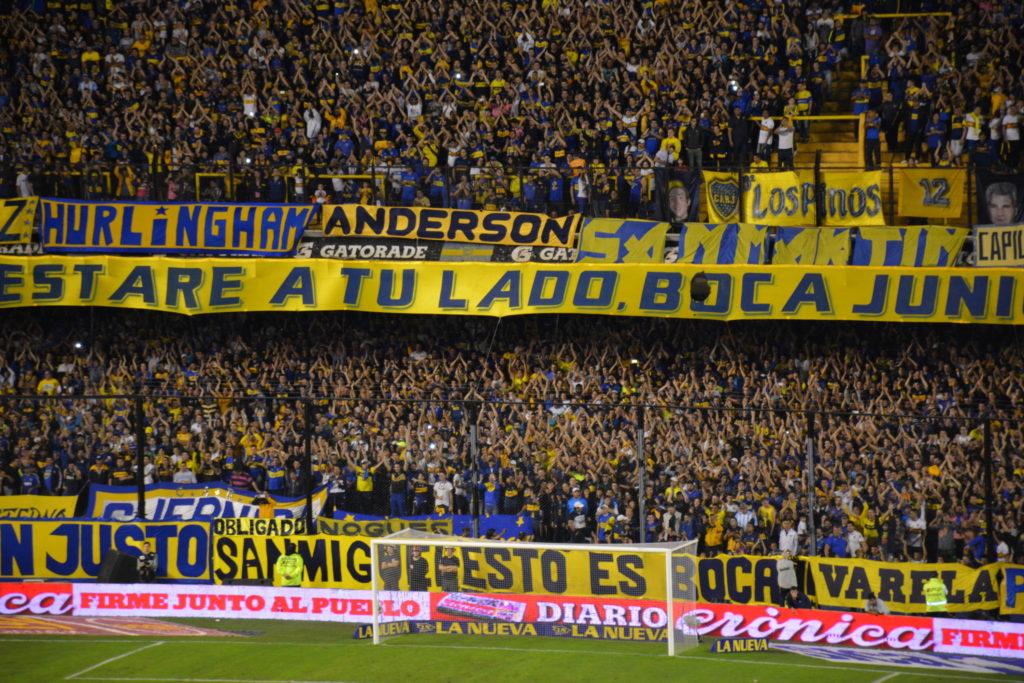 Once a year there is a “Superclásico” when the two biggest clubs meet. Boca vs. River. This was actually happening while we were in Argentina, however I opted to miss this match, partly due to the cost of getting tickets to that game and mostly because that match would simply be too dangerous to see. The English newspaper The Observer put the Superclásico (played at La Bombonera) at the top of their list of 10 sporting things you must do before you die.

Once we decided on the game we wanted to see, I had to find a way to enter the stadium. Boca doesn’t sell tickets to its games. It has a members only policy. There are exactly the same number of memberships as seats so there is no need to sell tickets. I heard there was an 8-year wait list for membership. For foreigners, the only secure way of ‘borrowing’ a membership card was to use a tour company. Thankfully I’d read on another blog about LandingPadBA.

LandingPad included meeting and a meal at a pub pre-game and transportation to and from the game. The pre-game meal was Argentine ribs, pizza sin queso for Natasha and unlimited beer. Once it was time to go from the meeting spot in San Telmo it was only a few minutes drive to La Bombonera, but it took well over 30 minutes with all the traffic and road blocks en route. Our guide used the time to brief us of what to expect while entering the stadium, police security checks, etc. Here is an email from LandingPad explaining the process.

Boca Juniors entry policy is very restrictive and their administration has created all sorts of rules and problems for non-members. Please listen to the guides advice as they are veterans and will be up to date with what craziness we have to deal with on game day.

Please expect to have some waiting periods. There are road blocks, multiple security check points and lots of people. Additionally, Argentina is…Argentina! Other random variables can cause delays that we simply cannot predict. Just sit back, relax and enjoy- the guides are there to deal with any issues that arise.

The visiting team’s fans have been banned from all professional league matches in all stadiums for the time being.

The football guides will escort the groups to and from the correct sections and deal with any issues that could potentially arise. It is wise to bring a little extra cash, your camera, but nothing of excessive value. Leave your passports, keys to the Ferrari and credit cards in your hotel.

Boca Juniors colors are blue and yellow. Please for the love of all that is holy, do not wear a jersey of a different futbol team from Argentina especially that of their arch rivals River Plate (Red and white combination). Some fans in and around the stadium are absolute futbol fanatics and this could create an unpleasant situation! There is no alcohol allowed within 500 meters of or within the stadium.

Upon entry expect to be searched (men and women will be separated, females with female police, males with males). Bags and backpacks are allowed, but no lighters, food or drink. For some reason make-up and perfume bottles have been being confiscated by police recently.

If it rains or has rained the day of the game expect your seat to be wet and consider bringing some napkins or a towel. Games are rarely canceled because of rain so dress appropriately and expect an even louder crowd!

Just before we exited the bus our guide handed us borrowed membership cards. These would be our way in and our new identity for the game. This is illegal, but nobody seemed to care I guess if you pay enough money in Argentina you can do what you want. Our family of five had seats all over a particular section but our guide said sitting together wouldn’t be a problem. She was right, but I’m sure that wouldn’t have been the case had we gone to the ‘Superclásico’ the following week. 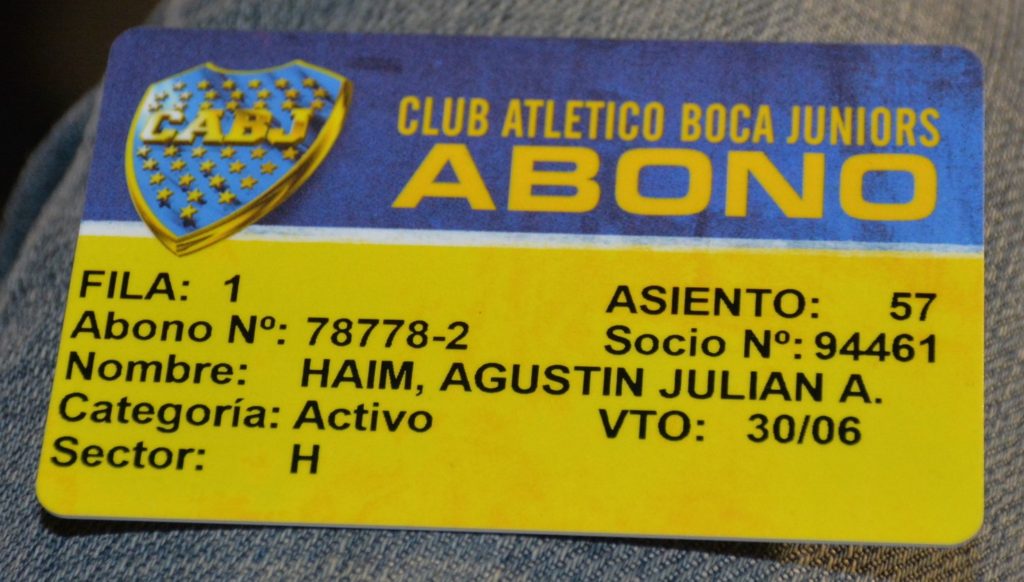 We arrived at least 90 minutes before kick off and already most of the supporters were in their seat behind the goals. These fans are called La doce. From Wikipedia:

“La doce” is a criminal organization similar to other “barra brava” gangs associated with football clubs in Argentina. Illegal activities by La doce include assault, drug sales and trafficking, extortion, and murder. La doce finances its activities by selling parking, reselling club tickets as well as extorting commission from the sale of players. La doce also extorts Boca Juniors for transportation to domestic and international events as well as their means of financing their activities. If their demands are not met they threaten violence at home matches or to take down club officials

Our seats were in the upper deck just above and to the side of La Doce, who looked like they’d already been there for hours. They are constantly chanting songs, banging huge drums and trying to climb the razor wire fence that separated them from the field. Most of the time they sang about their rivals River Plate even though they were playing someone else. This madness never stopped throughout the game and continued out to the street after the game. We saw buses of La Duce while on our way back to San Telmo after the game. 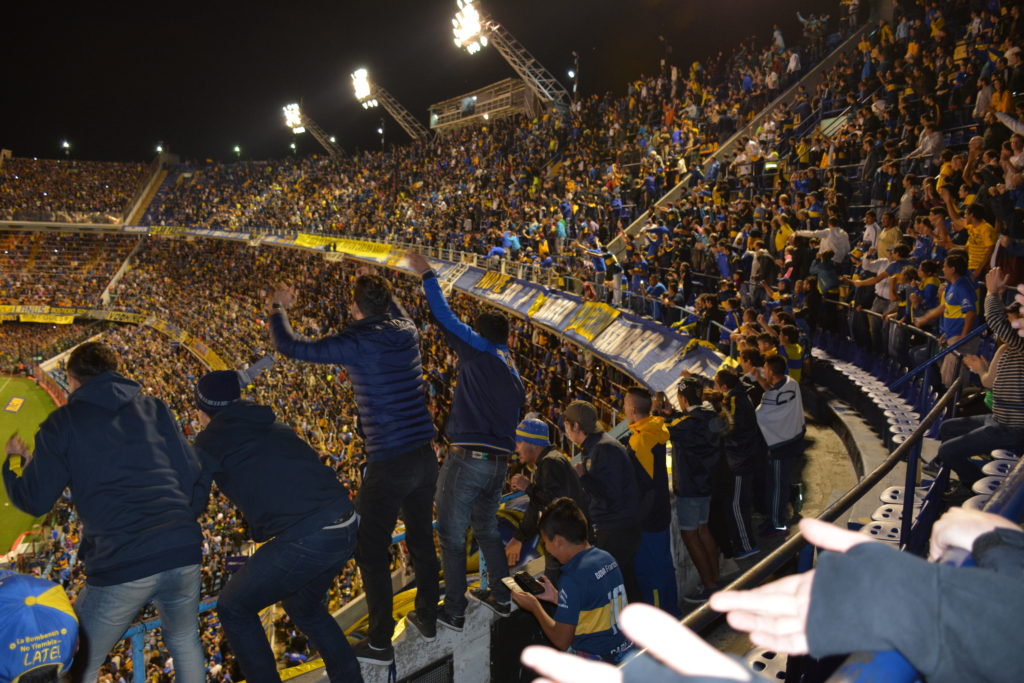 The game itself was pretty good. Aldosivi is a small team in Argentina but had beaten Boca twice in their short history. Boca carried most of the play but it was Aldosivi that scored first. Boca equalised just before halftime that sent La Bombonara into a frenzy that lasted throughout the break. They took the lead seconds into the 2nd half and scored another a few minutes later. By now the fans were really alive, singing and chanting and bouncing up and down. It felt like they were going to bring the upper deck down at times. When I think back to Boca vs. Aldosivi it reminds me of the Harlem Globetrotters vs. the Washington Generals. The Generals are just there to take a beating for our pleasure. The game ended with a 4-1 win for Boca, which was nice to see the fans happy and they got four goals to celebrate.

The goal celebrations are incredible, the lower decks behind the goals the fans all rush the razor wire topped fences and in the upper deck they all jump up on the railing and cheer, with just a small railing at knee height to prevent them from falling to their deaths below. I’m sure everyone in the Boca neighbourhood knows how many they’ve scored just by listing out their windows during games.

LandingPad BA put on a great tour, allowing us access to a venue and experience that we probably couldn’t have had without them. After spending two weeks in Argentina I’m sure we could have gone to see a game at San Lorenzo without the use of a guide or tour company, but it wouldn’t have been the same experience as seeing Boca Juniors at La Bombonera. 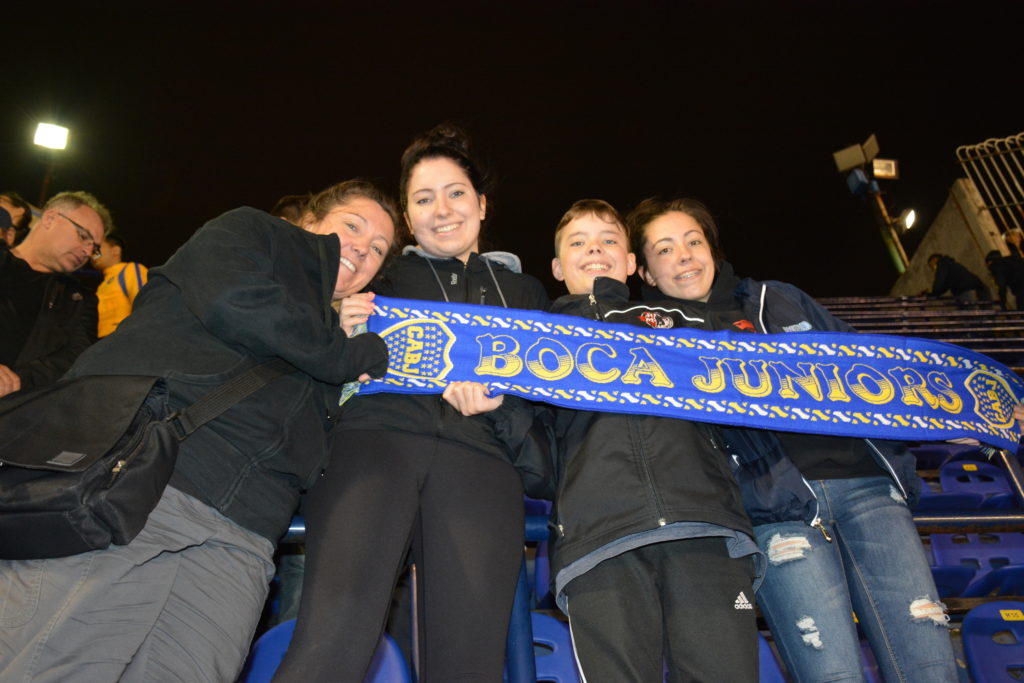 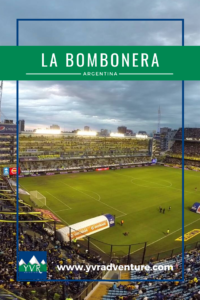 Check out our video from inside the stadium…