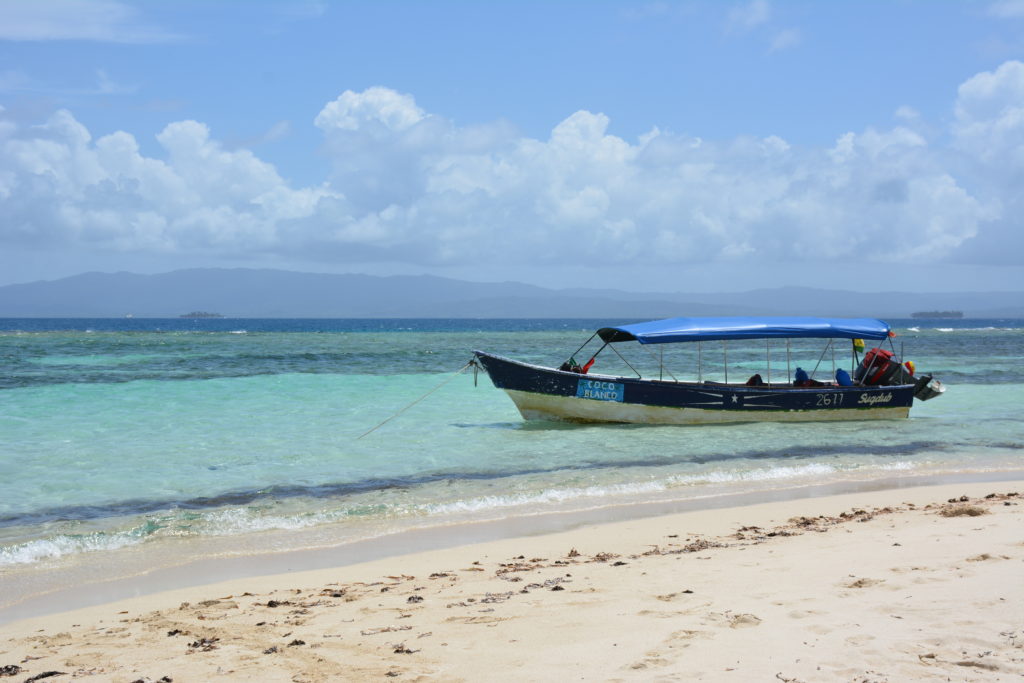 While researching places to see and things to do while in Panama I stumbled upon pictures of the San Blas islands. Anyone who does a quick google image search of the archipelago can see they look like paradise. With only five days in Panama, I was left to decide if we wanted to do a day trip or an overnight trip to these remote islands.

The islands are administered autonomously from Panama by the Kuna indigenous people. You have to cross passport control as part of the journey is to a region which is known as Comarca Kuna Yala. The drive to the port is 2-3 hours from Panama City with the last 45 minutes a poor road over the continental divide toward the coast. The road is notorious for passengers getting car sickness as it is a constant up and down with endless sharp turns. In order to maximise your time on the islands pick up in Panama City is typically just after 5 am. Upon arrival at the port around 8 am, your driver turns you over to the Kuna people, who are among the smallest people in the world. After about 20 minutes of confusion and chaos, you are brought to the pier to board your fibreglass boat for the 45-minute journey out to the islands. The boats seat about twenty people and three crew. If the road to the pier wasn’t enough to get you sick the white knuckle boat ride out to the islands might. It was the dry season when we went, but that also means windy season, the sea was very rough and the boat was slamming down hard after every 10-foot wave. You will get wet several times on the way out. We passed many islands before finally arriving on our island Coco Blanco, just as we arrived a splash came into the boat and the lady behind us was hit with a small squid.

Coco Blanco is a small island with very basic accommodation for about 12 people and is home for 2 or 3 Kuna families and very primitive amenities. There is no power, no running water, to use the toilet you must first fill the back of the toilet with seawater.  Shortly after our arrival a Kuna leader pointed to a nearby island and said that we would be staying there, not on Coco Blanco. Initially, that seemed ok. We were fed a meal of eggs, rice and fruit for breakfast, then changed into our bathing suits to enjoy the sun and beach. Unfortunately, since we were not staying on the island we had nowhere to put our things or change, it would have been much better if we had been set up in our accommodations first. 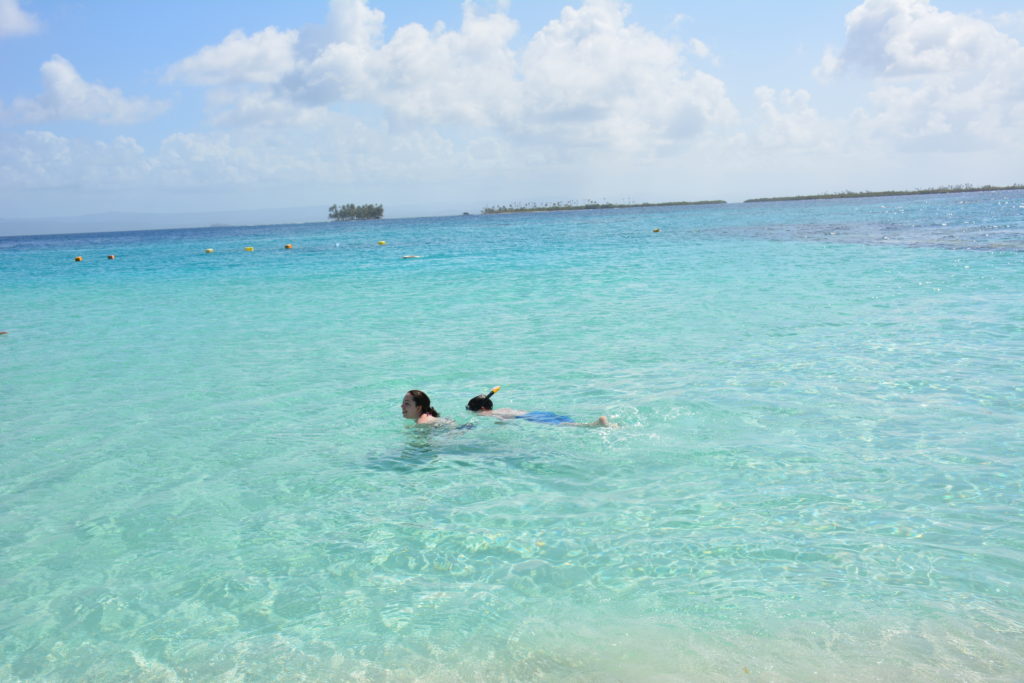 After lunch, we were taken by boat out to some other islands for a tour. First, we stopped at a place called the natural pool. Essentially a submerged sand bar that is home to several starfish with a calm, knee to waist-deep water. After about half an hour we left for Isla Perro or Dog Island. Dog Island is a picturesque white-sand island covering in palm trees with a small shipwreck perfect for snorkelling.  We spend the next hour or more swimming and snorkelling in the warm water around Dog Island before being transported back to Coco Blanco for dinner. By the time we were back on Coco Blanco, we were exhausted, sunburnt and wanted to get to our island to change and relax. Finally, dinner was served and frankly, it was the worst of the meals we had there, but still no sign of anyone to take us to our island. Soon the sun set and by this time the kids wanted no part of going back out on the ocean in the dark to get to our island. It really didn’t seem that safe to make the ten-minute crossing in the pitch black in those boats, but reluctantly we did it. By not getting us to our island in the daylight hours, we were forced to share one flashlight as we got changed and ready for bed. Being so far from civilization the view of the night stars was spectacular, but we weren’t able to enjoy it because we were so tired and just wanted to go to bed, wake up and leave the islands. 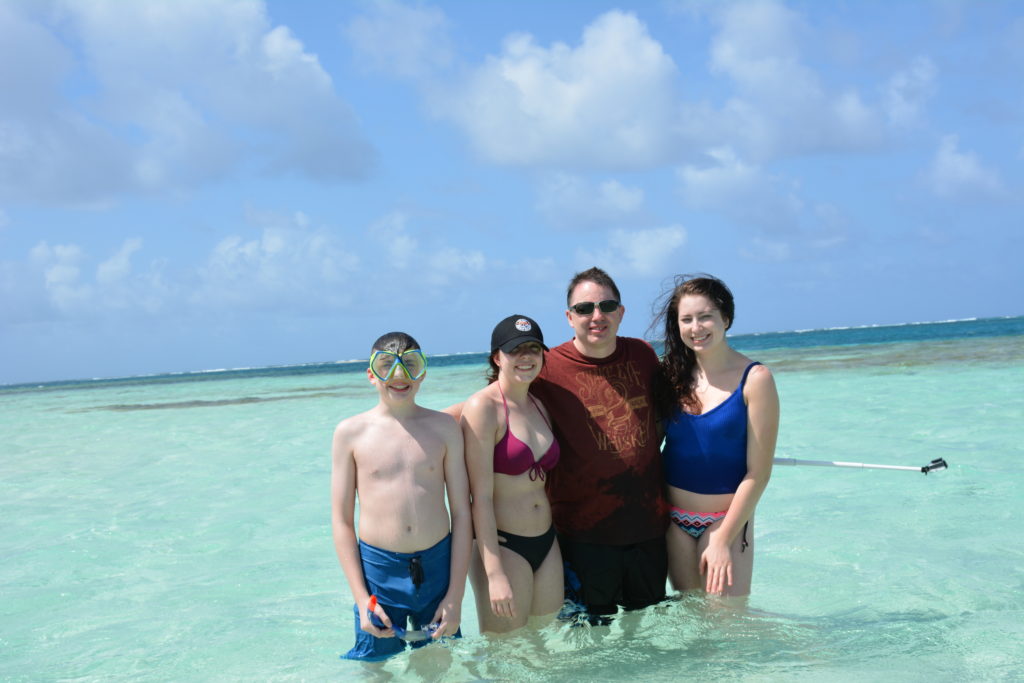 The next morning we were awakened by 7 am for the short boat ride back to Coco Blanco. Breakfast was served and shortly after we noticed several people were getting ready to leave the island for the mainland. Even though we weren’t scheduled to leave until the afternoon, Lynne was able to talk us onto the boat. We’d had more than enough sun and just wanted to get back to civilisation to recover. Just a few minutes later we found ourselves heading back to the mainland on what seemed like an overloaded boat. Nick and I were in the last row and it seemed like we were below the waterline as the small boat struggled to push through the rough sea. Finally, after another 45 minutes of agonising boating, we were safe on land. Lynne went ahead to find us a ride back to Panama City as our ride wasn’t scheduled to be there until much later. Thankfully we were able to share a ride back with a Canadian couple who had spent three days on Isla Perro. After three long hours of twisting, dusty roads we made it back to our hotel. 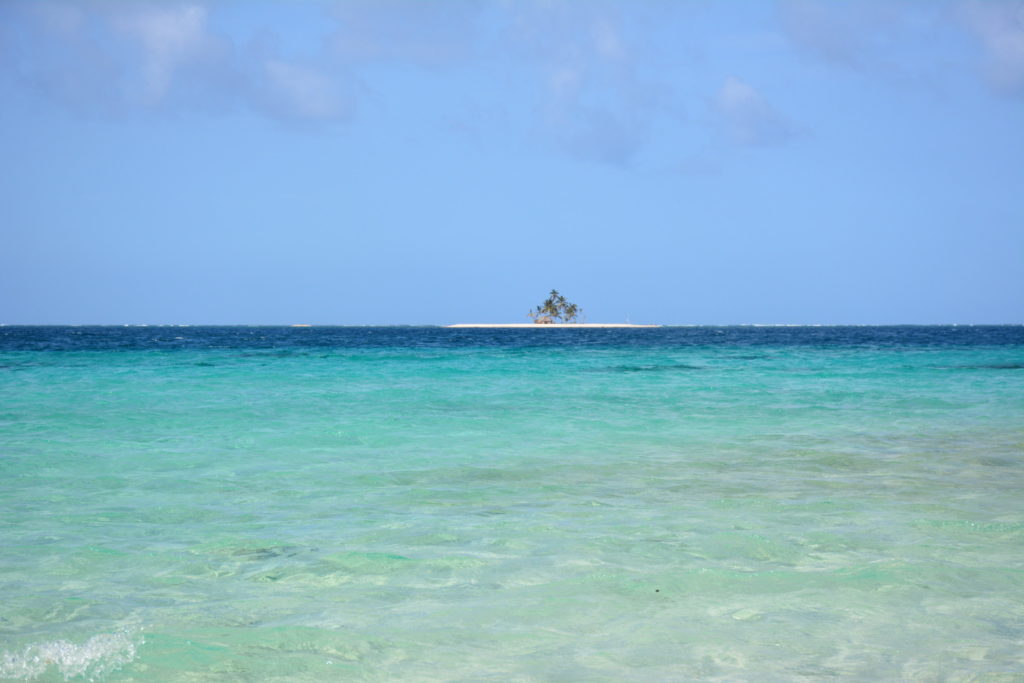 The San Blas Islands are an exceptionally beautiful part of the world. We loved our excursion to the starfish natural pool and snorkelling around Dog Island, but being in such a remote location with zero amenities made the trip something we wouldn’t do again. Many people love the lack of amenities and perhaps we would have enjoyed it much more if we’d simply been allowed to get set up in our tents earlier in the day. We did see a few catamarans offering tours in the archipelago and perhaps that is the way to go next time.